When I first started in ceramics I was told that learning to make pots is a process of training your intuition.  The longer I work in clay, the more I find it to be true.  Whether you are someone who appreciates the ceramic arts and wants a peak behind the curtain to see how these pots are made or you are maker looking for some tips and tricks, I hope some of these images can shed some light on what I like to call the art of letting go.

Throwing on the Wheel 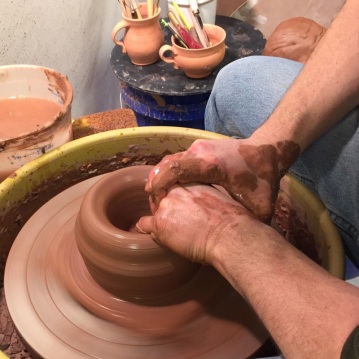 Opening up the ball 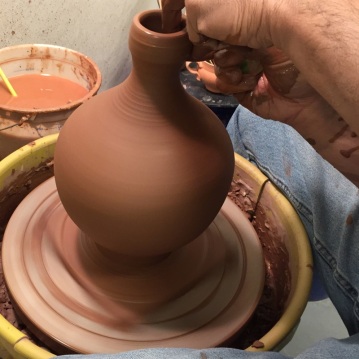 The wheel is a hypnotic tool.  I would say it is the most enjoyable part of the process for me.  I use a dark, smooth earthenware clay that is mixed and packaged by Laguna Clay. Traditionally earthenware clay is fired to a reddish orange, terra cotta color and is still very porous after the firing, but I fire my glaze kiln to 2079ºF, or cone 1, which vitrifies the ware. It makes my work much more like a deep chocolate colored porcelain that rings brightly when struck. To get the clay ready to work all I need to do is pat it into a ball and slap it on the wheel. Making a pot on the wheel is called throwing. I have heard this is an old English meaning for the word “throw,” which meant “to turn.” In some parts of the southern United States it is still called “turning.” I always tell my students that learning to throw pots is the beginning of the art of letting go. In order to center the clay on the wheel and keep it in center throughout the process you must release any pressure applied to it very gradually. The next stage of the art of letting go is when the pot turns out so badly you rip it off the wheel and “let it go” as you “throw” it across the room where it contacts the wall or floor with a satisfying splat. When the clay is centered it can then be squeezed between parts of the hand to open up the ball and create the walls of the pot. Many hundreds of pots must be made for this to become comfortable. A combination of metal, wooden, and plastic ribs are then used in conjunction with your fingers to expand and shape the clay into it’s final form.

Altering with a Paddle

Position yourself to see the profile

Work gradually towards the desired form

The wheel is the most efficient way for me to make a volume but I really don’t want all round all the time.  I began paddling forms after watching Chinese YiXing teapot makers paddle their small slab built teapots.  My forms certainly don’t show the mastery of the technique that theirs do, but I enjoy exploring the relationship between the starting form and a finished form that is often times different than what I was expecting.  It somehow breathes life into the process.  In order to move the form with a paddle you need to think of it more like a brush.  Hitting the clay while rotating the paddle in a circular motion pushes the clay in the direction that you want it to go.  This technique has allowed me to explore new forms like pilgrim bottles, and zoomorphic forms.

Spinning on the wheel

Splat on the sides

Even out the coat

Use a rough textured brush

Slip is a liquified clay applied to the surface of the pot to change the original clay’s texture or color. Historically, slip was used by potters who were after a certain type of ware but were not able to acquire the materials or technology to produce it in their locality. When lighter clays and porcelain were first being exported from China many cultures in the Mediterranean and Near East used white slip or glaze over their lower fired clay to attempt a similar effect. I use slip because I love the way it captures the action of the turning wheel. I apply my white slip to the pot immediately after it is thrown, using a soft bamboo brush. Then I use a second, more coarse, brush to create a stroke with a more visible contrast that occasionally cuts through to the dark clay underneath in a manner reminiscent of Korean hakeme. It does get tricky to attach handles over the slip, but I try to do it as cleanly as possible and then apply slip to those as well. 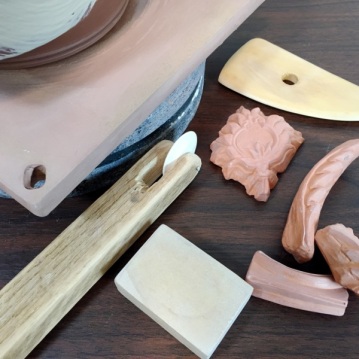 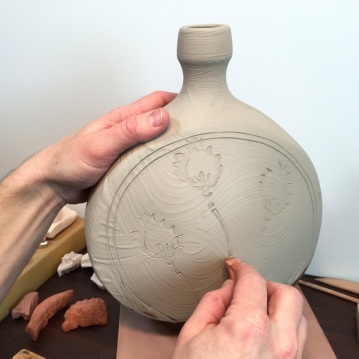 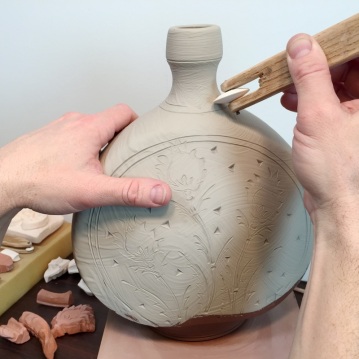 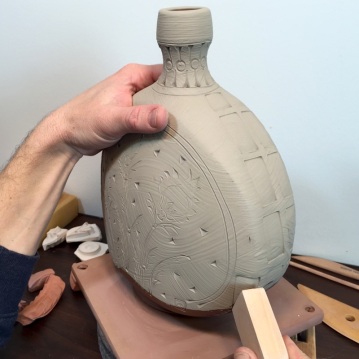 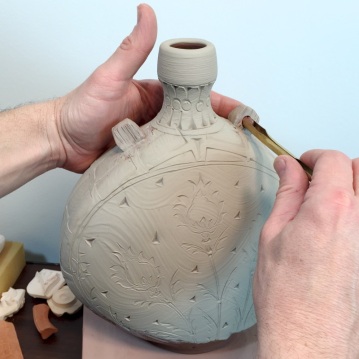 After many hours of drying the piece will be firm enough to stamp. If the pot is too dry it will crack when stamped and if it is too wet the stamps will stick and get clumped up with clay. I carve my stamps by hand from leather hard clay and fire them to bisque temperature before use. I make new sets of stamps quite often and learn to use the old ones in different ways.  I have built a large enough library of stamps to make the process feel more like drawing. One of the keys was to make stamps that were flexible and modular, like the flower stems, and adding rollers to create continuous lines.

Before I glaze my work it gets bisque fired to cone 012, or 1554ºF, to burn out all of the water and make the ware easier to handle in the glazing process. Ceramic glazes are not like paint. Complex interactions between the different ingredients occur within the kiln to give a glaze it’s surface, opacity and color. Many hours of testing and many consecutive firings must be done to change the color or develop a new glaze. I use traditional materials like iron, copper and cobalt instead of exotic metallic oxides or stains to achieve colors in my lead free, high alkaline glaze. When it comes to actually putting the glaze on the pot , I prefer to pour the inside, dip the outside, and then apply additional layering by brush. After glazing I clean the bottom with a tray that has a completely saturated 3/4″ sponge in the bottom to keep the glaze from sticking the pot to the shelf. When they are all clean, they get loaded into my electric kiln and fired for eight hours to cone 1, which is about 2076ºF.  This is the final stage of the art of letting go, where you close the loaded glaze kiln and start the firing.  You have to let go of your expectations about what you thought the pieces were going to look like and be willing to judge them for what they are when they come out.  There are many surprises in the kiln and the unpredictability drives some people away from working in clay.

In the past clay and glaze recipes were considered trade secrets or the products of proprietary research, but in the 1940’s when ceramic programs began to enter the university system in the United States that view began to change. Studio potters, who were teaching, began to share recipes and write books on the subject that were accessible to their students. This tradition has expanded to encompass much of the ceramic art community to the point that now many thousands of clay and glaze recipes are available from books, magazines, school handouts and the internet. This wealth of information has helped to create a vibrant group of artists, but has also unfortunately allowed people to avoid learning anything about the materials in the glazes that they use. It makes it difficult to correct any firing problems not to mention the potential threat this lack of knowledge poses to the health of the potters and their customers. If you are not willing to take the time and effort exploring the technical aspects of creating your own glazes I would suggest buying some of the excellent commercial glazes available at a ceramic supply shop.

My base glaze was developed from Lisa Orr’s glaze recipes, which I found in the May 2000 issue of Ceramics Monthly. I was after the same color range and fluidity, but at a higher temperature. This glaze has it’s share of issues but I have found the benefits outweigh the problems for my work. The glaze is soft enough to scratch in a stack of plates and get matt on the edges after a long time of being washed everyday in the dishwasher. In the bucket it can grow fantastic hexagonal crystals if it gets colder than 40ºF. This glaze is also very prone to blistering if it isn’t applied or fired correctly. I guess all I’m saying is mixer beware!

This is a porcelain recipe that Harris Deller gave me off the top of his head one day when I was looking to make some clay as a BFA student. It was the worst clay I had ever thrown, but it makes a great slip with a few additions.

CMC is Carboxymethylcellulose gum. It is added to many processed food products to give them “mouth feel.” I have been using it in slips and glazes for quite some time it gives a great fluidity to the slurry and adds a dry strength to raw glazed ware. Thick slips that are meant to give the work some texture lose a little punch in the drying process without some CMC water in the mix.

I started making this color blend after the Chinese blue and white porcelain painters visited WVU as part of their exchange program with Jingdezhen Ceramic Institute. They told us how to make the authentic color and this is my version. I pre-mix this as a dry compound and then add it like a regular colorant to my recipes.